Exercises to Avoid with a Lumbar Herniation 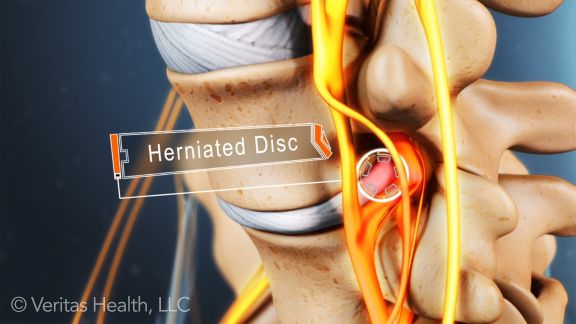 It can be frustrating to know which exercises work well, and which do not, for the varied symptoms of a lumbar herniated disc. These symptoms can include numbness and tingling in the legs, decreased strength, diminished sensations, and generalized back pain.

Here are 3 exercises to avoid, and some safe substitutes:

Nothing could be further from a good morning with this weight-lifting exercise. Even if the good morning is performed by someone without a disc herniation, it could lead to problems.

In a good morning, weight is placed on the shoulders, similar to when performing a traditional squat. The next step is to bend forward at the hips and allow your chest to drop toward the floor while maintaining a straight spine and legs. The exercise is a problem because it places a large working load on the lower back and buttocks.

Instead, try a "waiter’s bow" A better alternative would be a “waiter’s bow.” It involves bending forward from your hips, gently placing your hands on a bed, and allowing your body to rock back slightly. Always maintain the natural curve in your lower back while doing this stretch—never let your lower back flatten or arch upward.

When returning to standing, squeeze your buttocks and drive your hips forward, rather than arching your back and lifting your torso.

This can be a valuable exercise to re-learn how to use the buttock muscles, rather than the low back, in order to stand. This version of a waiter's bow exercise is also gentle as it supports your torso through placing your hands on the bed.

If you want to increase the difficulty, place an elastic band around your hips and anchor the opposite end on something (such as a door knob) behind you so your hips must work against resistance when driving them forward and standing up.

Yes, it is important to stretch your hamstrings daily, but the common approach of “stand and reach for your toes” could cause serious issues when dealing with a herniation. The problem is that the stretch allows the back to compensate and bend forward, placing unnecessary stress on the front half of the disc.

Instead, stretch your hamstrings lying down Instead, lie down on the floor near a doorway, straightening—as much as you can—the leg you will not be stretching through the opening. Next, place the leg you will stretch leaning up along the doorframe. The closer you get to the wall, the more intense the stretch. A common issue with stretching is that people go too aggressively. Make the stretch mild, or you’ll waste your time.

Remember to stretch both legs, but only one at a time.

If you’re a CrossFitter, you probably just screamed and slammed the laptop closed in frustration, but hear me out. One of the most common movement problems is allowing your lower back to round out while bending forward or lifting an object. A deadlift requires perfect mechanics. Even when done well, it will cause a great amount of compression at the disc.

See Avoid Back Injury with the Right Lifting Techniques

Instead, make a bridge A substitute for a deadlift could be a bridge, where the core (abdominals and hips) are active. While lying on your back, knees bent up and feet flat on the floor, contract your abdominals and buttocks. Next, you raise your back and buttocks off the table in one solid unit, rather than rolling up vertebrae by vertebrae, by pushing through your feet. A variety of modifications can be made to increase the difficulty, such as marching, performing the bridge with one leg, and lifting your hands into the air.

Sometimes low back pain could be coming from other parts of the body, and sending the symptoms to the area of the lower back. Before trying any exercises or stretches it is always best to have thorough medical evaluation, rather than try to self-diagnose and treat.

The majority of treatment and rehabilitation recommendations will include some sort of exercises program; if you have a clinical diagnosis of a lumbar disc herniation, then knowing which versions of exercises to avoid and which are more effective are an important part of helping you better reduce and manage your symptoms.

Watch Video: Can Herniated Discs Heal on Their Own?