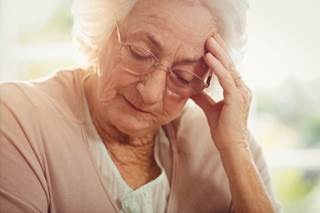 Headache in older adults often represents a different diagnosis than in younger persons, and often with more serious consequences. Although primary headache is common in older adults, headaches secondary to underlying or comorbid conditions become more prevalent with age. The use of multiple chronic medications in the elderly also increases the risk for pharmacy-induced headache.

It is important for clinicians to determine potential underlying causes quickly and accurately and to prescribe treatments that take into account comorbidities that older patients may have and medications that they may be taking for them.

Headaches in older adults are less common than in younger persons, but they are still a cause for concern.Although the prevalence of headache decreases after age 40, estimates in people over age 50 range from 12% to 50%, and frequent headaches are reported in up to 17% of people >65 years old, compared with 45 years old. Many symptoms — including nausea, vomiting, and sensitivity to light and sound — diminish with age, whereas autonomic symptoms and neck pain tend to increase.

Migraine aura without headache may have similar visual, speech, and sensory disturbances seen with transient ischemic attack. Symptoms that develop in a sequential, increasing pattern that abate after 60 minutes or less are more suggestive of migraine aura, which is often followed by a migraine headache in 40% to 50% of cases. The onset of new symptoms of aura in a patient without a history of migraine requires prompt evaluation for other serious causes, including transient ischemic attack, seizure disorder, and intracranial hemorrhage.

Hypnic headache is a rare condition that usually occurs only in adults >50 years and most often starts around age 60. These are mild to moderate headaches of short duration that rouse an individual while sleeping. The pain is usually dull and not associated with other symptoms of migraine or other headaches. A diagnosis requires a frequency of 15 or more episodes per month; possible secondary causes that should be ruled out include nocturnal hypertension, posterior fossa and pituitary tumors, the use of angiotensin-converting enzyme inhibitors, and in at least one case, sleep apnea. Hypnic headache is usually very treatable with caffeine, melatonin, or lithium (although this is rarely necessary).

A range of underlying causes are known to produce new-onset headache symptoms. These may be difficult to diagnose, as the headache may be accompanied by multiple other symptoms. Among the most serious conditions are those involving stroke or intracranial hemorrhage or neoplasm. Additionally, headache is often the first sign of giant cell arteritis.

Other conditions that may be infrequently associated with new-onset headache include chronic obstructive lung disease with hypercapnia, cardiac cephalgia, sleep apnea, glaucoma, and cervicogenic headache.

Thunderclap headache, often described by patients as “the worst headache of my life” involves the sudden onset of sharp headache pain of severe intensity that peaks within 60 seconds. This presentation is indicative of the need for immediate medical evaluation for potential life-threatening conditions such as intracranial bleeding from hemorrhage or hematoma. A blunt trauma to the head from a fall or other event or use of anticoagulant medications should first be ruled out.

In the absence of intracranial bleeding, other serious causes that should be ruled out include reversible cerebral vasoconstriction syndrome, cerebral venous sinus thrombosis, cervical arterial dissection, meningitis, encephalitis, and spontaneous intracranial hypotension.

Giant cell arteritis is a serious multisystem disease that frequently affects the temporal artery or branches of the carotid arteries but may also be present in the aorta and its major branches. Giant cell arteritis occurs in individuals >50 years old and the incidence increases with age.

Widespread headache (cranial arteritis) is a frequent first sign. Other symptoms include visual impairment and peripheral neuropathy. The disease may be silent in some patients. Diagnosis can only be confirmed by a positive temporal artery biopsy that shows vasculitis with mononuclear cell inflammatory infiltrates. Color duplex ultrasonography of the temporal arteries and fluorodeoxyglucose-positron emission tomography with total body contrast-enhanced CT are useful tools for non-invasive diagnosis of giant cell arteritis.

Giant cell arteritis can be treated effectively with glucocorticoids at 40 to 60 mg/day. The addition of 100 mg/day of aspirin has been shown to significantly prevent stroke and vision loss.