The Long Lasting Effects Of An Ankle Sprain 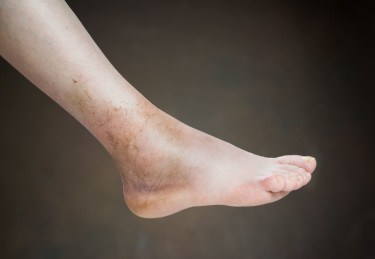 You put thousands of steps on your feet on a daily basis, and they never take a day off. Because we ask our feet to do so much, it’s no surprise that ankle sprains are one of the leading types of physical injury. It’s also not surprising that an ankle sprain can have long last consequences.

Most people notice that the pain, swelling and bruising from a sprained ankle resolve after a few days or weeks, but if the underlying mechanism of the ankle is affected, over time, a person may develop chronic ankle instability. As we mentioned in a recent post, college students with chronic ankle instability tended to be less active than students without the condition, but now we’re learning even more about the long lasting effects of a sprained ankle.
Mouse Study

The college student study was co-authored by Dr. Tricia Hubbard-Turner, and she said the findings echoed a similar study she conducted on mice. In that study, researchers tracked two groups of mice. One group of mice had their ankles surgically addressed to simulate a mild sprain, while the other group acted as the control. Researchers let the sprains heal for several days before allowing the animals to have access to a running wheel and narrow beam. Using those devices, researchers were able to see how activity and balance were affected even after a sprain had healed.

After tracking the mice for a year, researchers noted:

The mice in the control group were consistently running more mileage on their wheel than the sprain group.

This discrepancy was even more evident among mice whose injury simulated a severe sprain, although the injury had long since healed.

The mice in the sprained ankle group continued to slip on the balance beam more often than the control mice.

Researchers concluded about 70 percent of mice in the sprained ankle group had developed the rodent equivalent of chronic ankle instability.

“In these animals, a single sprain had led to far more inactivity” Hubbard-Turner said.

Although mice and humans are different, Hubbard-Turner said there’s a take home message in the study.